Today, almost 80 million people in the world consider German as their native language. It is the official language of six Western European states. In addition, residents of more than twenty countries use it as a second language. These are mainly immigrants from Germany, living today in the USA, Canada, Australia, Brazil, and other countries of the world. In terms of prevalence, it is one of the ten most used such as  japanese translator.

German belongs to the West Germanic languages ​​of the Indo-European language family. As a result of long development and its wide territorial distribution, a huge number of dialects have been formed. There are more than sixteen of them in Germany alone. All of them carry the peculiarities of the local national culture and education. The German language is versatile, lively and agile. In order to become a professional translator, you need to be truly passionate about him.

When working, a translator has to master the peculiarities of German translation and the unique originality of adverbs. Specific characteristics of speaking and writing include:

The presence of dialects that differ significantly from each other.
The ambiguity of words. The translator has to use many words not in a dictionary meaning, but rather in an intuitive one, coordinating the meaning of words with the general context of the content. The correct choice of the narrow meaning of the Russian correspondence to the word depends on the depth of the specialist’s mastering of the subject of translation.
Strictly regulated word order in a sentence. Each part of speech has its own specific place. The special word order in the sentence creates difficulties in simultaneous translation. According to the rules, the conjugated predicate is located at the end of the subordinate clause, and the auxiliary verb is at the beginning of the sentence in second place. It turns out that the main semantic utterance is voiced only at the end of the phrase. The meaning of the phrase is understood only when you have listened to the entire sentence in full.
The presence of six tense forms of the verb, including three of which refer to the past tense. The peculiarities of translation from German consist in the correct choice of the verb tense. It can be simple, complex, or represent a long past action. Incorrect use of verbs can lead to distorted meaning and stylistic errors. 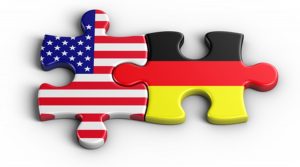 Infinitive constructions that have no analogues in Russian.
Compound words. Often they express not just a concept, but a logical meaningful relation. Many of these words are not listed in dictionaries. Long-term words are not translated into Russian literally, but by a descriptive expression that conveys meaning. The translator should not only translate the verbal structure, but catch the play on words and convey it adequately.
Gender mismatch of nouns. German uses definite and indefinite articles to denote gender. You need to know when to use this or that article, as it is not always possible to use it intuitively. The ratio of words in Russian to feminine, masculine, or neuter does not coincide with German.
In general, the German language is flexible and flexible. New forms and constructions of words continue to form in it today. The peculiarities of German translation require special knowledge and significant experience in translation work from the translator. A significant lexical stock of the native language and its skillful use are required. Understanding the nuances is necessary to maintain the accuracy of the transmission of the text and the general expressiveness of speech.